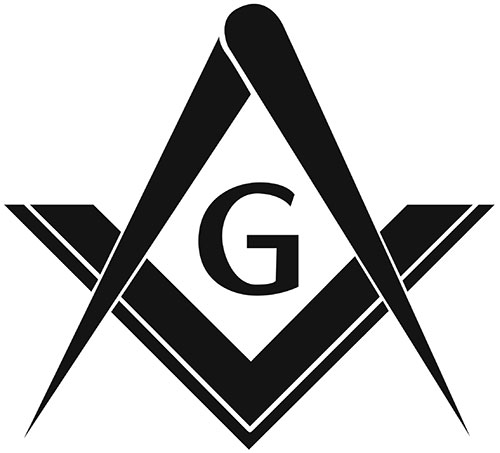 No one knows with certainty how or when the Masonic Fraternity was formed. A widely accepted theory among Masonic scholars is that it arose from the stonemasons' guilds during the Middle Ages. The language and symbols used in the fraternity's rituals come from this era. The oldest document that makes reference to Masons is the Regius Poem, printed about 1390, which was a copy of an earlier work. In 1717, four lodges in London formed the first Grand Lodge of England, and records from that point on are more complete.

Within thirty years, the fraternity had spread throughout Europe and the American Colonies. Freemasonry became very popular in colonial America. George Washington was a Mason, Benjamin Franklin served as the head of the fraternity in Pennsylvania, as did Paul Revere and Joseph Warren in Massachusetts. Other well-known Masons involved with the founding of America included John Hancock, John Sullivan, Lafayette, Baron Fredrick von Stuben, Nathanael Greene, and John Paul Jones. Another Mason, Chief Justice John Marshall, shaped the Supreme Court into its present form.

Over the centuries, Freemasonry has developed into a worldwide fraternity emphasizing personal study, self-improvement, and social betterment via individual involvement and philanthropy. During the late 1700s it was one of the organizations most responsible for spreading the ideals of the Enlightenment: the dignity of man and the liberty of the individual, the right of all persons to worship as they choose, the formation of democratic governments, and the importance of public education. Masons supported the first public schools in both Europe and America.

During the 1800s and early 1900s, Freemasonry grew dramatically. At that time, the government had provided no social "safety net". The Masonic tradition of founding orphanages, homes for widows, and homes for the aged provided the only security many people knew.

The four million Masons worldwide continue to help men and women face the problems of the 21st century by building bridges of Brotherhood and instilling in the hearts of men ideals for a better tomorrow.

What is a Blue Lodge?

This discourse is designed to give you a brief introduction to the Craft and the mainstay of Freemasonry, the Blue Lodge, or symbolic Lodge, as it is more properly known. Every man's journey into Freemasonry begins in a symbolic Lodge, where he receives the first three Degrees in Masonry. These are known, respectively, as the Entered Apprentice, Fellowcraft and Master Masons Degrees. Some refer to them as the 1st, 2nd and 3rd Degrees. Only the most profound ritual and symbolism characterizes our Degrees, designed to open the eyes and mind to a higher ideal.

Masonry is a closed society, not open to the general public, but rather to persons of like persuasions and ideals. While no two people are alike, they can share a common belief in the Brotherhood of man and in ONE who we in Masonry refer to as the Supreme Architect of the Universe. The tenets of Masonry are Brotherhood, Relief and Truth. We espouse all men being equal, regardless of their worldly wealth or position, and attempt to relieve our fellow man’s woes and tribulations, again regardless of membership in the Fraternity. We also practice the virtue of Truth. This may be the hardest of all, because it is often easier to tell a little white lie than to confront one with the truth.

Masonic Lodges, also known as Blue Lodges, are where Freemasons meet for meetings. These Masonic Blue Lodges are in many towns and cities throughout the world. You can easily identify where Freemasons meet by the Square and Compass emblem displayed on the building, either mounted on a wall or sign. Local Blue Lodges are organized under a Grand Lodge. Each state has a Grand Lodge, which presides over the operation of all Blue Lodges within that state. Joining a Blue Lodge is usually done by meeting a Brother from the Lodge that you are interested in joining. This Brother will be your guide to help you navigate the membership and initiation process of his Lodge. No man may become a Freemason without first being recommended by two Brothers and then having been found to be of good report by the Lodge's Investigation Committee.

Freemasonry is the oldest, largest Fraternity in the world. Its members have included Kings, Presidents, Prime Ministers, Statesmen, Generals, Admirals, Supreme Court Chief Justices, corporate CEOs, opera stars, movie stars, and probably, your next door neighbor. Freemasonry is always ready to welcome good men in the Fraternity, and the Grand Lodge of Florida, if within your heart you can answer yes to a few questions:

Do you believe in God, or an everliving Deity?
No atheist can be a Mason. Freemasonry does not concern itself with your individual faith, as this is a question between only you and your God; however, we do require that a that a man believe in a Supreme Being.

Are you willing to allow others the same right to their own beliefs that you insist on yourself?
Freemasonry insists on toleration, and on the right of each person to think for himself in religious, social and political matters.

Do you believe that you have a responsibility to leave the world a better place than you found it?
Freemasonry teaches that every man has a duty not only to himself, but to the whole of mankind. Masons must do what they can to make the world a better place. Whether that means cleaning up the environment, working on civic projects, or helping children to learn, read or see. The world should be a better place because Masons have passed through it.

Do you believe that it is more important to give than to receive?
Freemasons are involved in many civic and Masonic charities because we are obligated to help others in need. Much of our help is given anonymously, as Masons are not seeking fame or accolades. Gratitude comes from helping others overcome adversity to improve their lives.

Do you feel that there's something more to life than financial success?
Freemasonry regards no man for his worldly wealth or possessions. Masons know that self-development is more precious than money in the bank, or social position, or political power. Those things often accompany self-development, but they are no substitute for it. Masons work at building their lives and character, just as a carpenter works on building a house.

Do you believe that a person should strive to be a good citizen and that we have a moral duty to be true to the country in which we live?
freemasons believe that a country is strong as long as freedom, equality, and the opportunity for human development is afforded to all. A Mason is true to his government and its ideals. He supports its laws and authority when both are just and equitably applied. Masons uphold and maintain the principles of good government, and oppose every influence that would divide it in a degrading manner.

Do you agree that man should show compassion for others, that goodness of heart is among the most important of human values?
Freemasons believe in a certain reverence for all living things and a tenderness toward people who suffer. A loving kindness for our fellow man, and a desire to do right because it is a matter of principle. Freemasonry teaches that although all men are fallible and capable of much wrong, when they discover the goodness of heart, they have found the true essence of virtue. Masonry helps men see their potential for deep goodness and virtue.

Are you willing to give help to a fraternal Brother when he needs it, and to accept their help when you need it?
Freemasonry teaches and requires mutual help and understanding among its Brothers. Help comes in many forms, including financial; however, making yourself available to fellow Brothers by offering compassion, support, a sympathetic ear, or warning of approaching danger are all supported by Freemasonry.

Do you believe that men should strive to live a Brotherly life?
Masons see Brotherhood as a form of wisdom and a bond that holds men together. It is a private friendship that requires us to be just in our dealings, and to refuse to speak evil of each other. Freemasons believe a man should maintain an attitude of good will, and promote unity and harmony is his relations with others, his family and community. Masons term this as a way of believing in the Brotherhood of Man. It means that every Mason makes it his duty to follow the golden rule. This is why Masonry has been called one of the greatest forces for good in the world.

If you answered YES to all of these questions, you should consider becoming a Freemason within the Jurisdiction of Florida. Freemasonry offers to its members the opportunity to grow, the chance to make a difference, and to build a better world for our children. It offers the opportunity to be with and work with men who have the same values and ideals. It's easy to learn about Freemasonry in Florida. Simply locate a Lodge within your community, contact the Lodge Secretary and schedule a convenient time to visit the Lodge. If you experience any difficulty finding a Lodge, or contacting the Lodge Secretary, contact the Grand Lodge of Florida and we'll be happy to help!

Find a Lodge Near You